A taste of Switzerland at the China International Import Exhibition

Shanghai (November 3, 2022) – The Chinese Prime Minister mentioned in May that 180 million Chinese depend on foreign trade for their jobs. That is almost 25% of the working population. Additionally, 36% of China’s exports are realized by foreign invested companies. The China International Import Exhibition (CIIE) showcases China’s commitment to further opening up its massive market as reiterated by the recently held Communist Party Congress.

In the biggest exhibition center of the world, more than 2’900 exhibitors will present their products on a total exhibition area of 366’000 square meters. Data shows that more than 280 of the world’s top 500 enterprises and industry giants will participate in this year’s CIIE, with nearly 90% of the participants from last year also joining this year.

Just like in the previous four editions of the fair, the Swiss Centers (www.swisscenters.org) are an official partner of the CIIE and facilitate the participation of Swiss companies. At the Swiss Centers booth at the CIIE from November 5 to 10 in Shanghai, 20 Swiss brands join forces to deliver a unique taste of Switzerland to the hundreds of thousands of expected CIIE visitors and purchasers – 136 square meters of Swiss food and beverage delicacies as well as other consumer goods! Among the Swiss brands present are Migros, the Morand distillery, Kübler absinthe, Kambly biscuits, Frey chocolate, Swiss Wine Promotion, Swiss meat, and others. Novartis and UBS sponsor the Swiss booth and bring a stronger Swiss image.

“The CIIE is an ideal opportunity for both big enterprises and SMEs to showcase and test their quality products in this attractive but complex market. We are thrilled to be present with a joint Swiss booth again. This allows many Swiss brands to optimize their visibility in the exhibition and in the market, with visitors and media from all over the country,” says Mr. Zhen Xiao, CEO of the Swiss Centers Group. The Swiss Ambassador to China, Mr. Jürg Burri, who recently took office, and the Consul General in Shanghai, Sacha Bachmann, will attend the CIIE and visit the Swiss Centers booth.

Despite the global economic difficulties and Covid-related lockdowns in China, recent trade developments between Switzerland and China remained very positive: “Year-on-year, Swiss exports to China (including Hong Kong) grew by 1.8% during the first three quarters. Our exports to Germany increased by 0.4% only in the same period. Besides, the third quarter Swiss exports to China and Hong Kong increased by 16.7% compared to the second quarter. This growth was mainly driven by a strong watch and precision instruments rebound with a plus of 38.9%.”

“With the focus on innovation and high-tech, also re-emphasized during the Party Congress, the Chinese market is in growing need of high-quality products and services. Swiss companies continue to benefit from that,” explains Nicolas Musy, Delegate of the Board of the Swiss Centers Group, a non-profit organization that lowers the Asian market entry hurdles for Swiss enterprises. 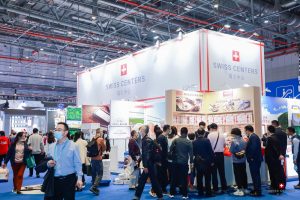 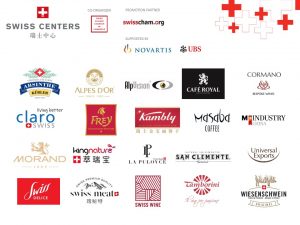 Picture legend: 20 Swiss brands will be present at the Swiss Centers booth.